December is a rough time of the year to begin a business, especially in Maine.  It wasn’t our original plan.  We had wanted to be more established in our seven previously secured accounts in time to benefit from the holiday shopping season.  Business rarely goes as planned.

We opened BEFORE our Dell computer arrived so whatever limited business, we were able to conduct was with handwritten invoices, (remember the hand-held solar-powered calculator?  It was still a critical part of the office equipment.)  We wrote checks using the one-write system for recording transactions in the ledger.  One-write just meant there was a carbon copy left behind after tearing out the handwritten check.

We remember a fair number of adjustments being entered once the statement arrived. We eventually called Joe Vitco for advice about moving our computer acquisition along.  It seems we were put in a less urgent fulfillment pile.  Clearly, we needed it ASAP. His simple advice, which we still employ today, was to call and ask to speak with the owner and see if that helped.  We did, and our computer arrived THE NEXT DAY! Thank you, Michael Dell.

But we digress. It was too late to really reap the benefits of the holiday shopping season, we were still very much ensconced in installing ourselves into our seven accounts.  One such location was Tuttle’s Red Barn.  We remember going to meet with Lucy Tuttle with three sample bags of our coffee and a list of all the other coffees we had to offer.  Without much hesitation, she pointed to a rather large space of shelves and said to fill it up, with pounds, half pounds and “one pots”.  We returned to home base elated that we got so much space but also knowing we had quite a lot of work to do.  Did we mention that she wanted it delivered the next day? 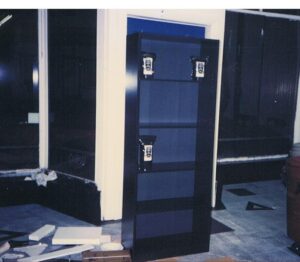 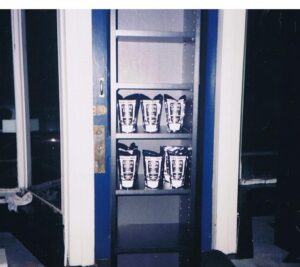 It was a coup.  The only hitch was that our menu of coffees was only as good as the names we had assigned them.  We still needed to come up with the actual blends.  Jane began roasting each the varietals, and some of them both in full-city roast (light) and French roast (dark).  When we had all 13 batches complete, we brewed an airport of each and began blending and matching names. 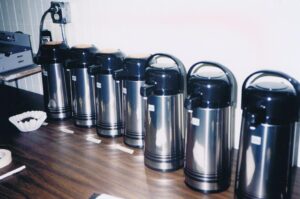 We were hours into this process, and late into the night, (four AM) and rather jittery after all the tasting when we heard a startling knock on the door.  It was a neighbor, Victor, who couldn’t stand it any longer, he saw the lights on and just had to know what his new neighbors were doing.  We invited him to join in the fun.  He looked over the names we had picked for the various coffees and suggested we add some more manly names like Thunderbolt Blend.  Even with our addled minds we both knew that was a winner.  We asked if he minded if we use that name. He was thrilled.  It is one of our best sellers. 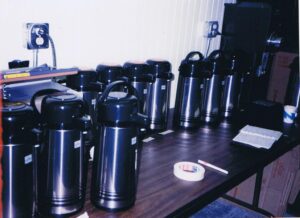 We hit our delivery time with three pounds, three half pounds and three one pots of each the coffees we had to offer at that time and a display rack we had to purchase and assemble to hold the “one pots”. It was a sight to see all those shiny black and white bags displayed neatly on those shelves.  We left Tuttle’s Red Barn proud of a job well done.  We left with a bunch of boxes they were discarding, and which needed for future deliveries. We held that account until they sold to new owners.  It was a good run. Thank you, Lucy Tuttle.