As we have stated, Jane and I had secured seven accounts before we had even opened our business.  One such account was Cafe Brioche, in downtown Portsmouth, NH.  It was located on the hottest retail corner in the city. It required a massive brewer, coffee serving units and warmers and several grinders.  It involved hiring out the job of installing the equipment, since neither of us knew an amp from a volt from a third rail.  We were somewhat terrified of that part of the business.  We understood that the price of admission into new business was offering the whole package from a great product to full service. One of us still carries around a cell phone for emergencies during the off -work hours.  One such call from Cafe Brioche involved our loading up the van with several pour-over brewers to rush down and try to keep up with their brewing needs while the company from Brockton, Massachusetts sent up their emergency guy, Buzzy, who we got to know all too well.  Cloaked in our Superwomen capes we set up brewers in out- of-the-way spots and began to brew.  In theory it was a genius plan.  In reality, we managed to pop fuses and trip circuits all over the café, rendering them in worse shape than before our arrival to save the day.  That was our first lesson in amps and outlets.

Cafe Brioche was probably the main reason we survived through the first few years, while we grew the business.  We made weekly deliveries down there that literally filled our van with product.  Thank you, Paul Norton.

His was another account that we maintained until Paul sold the business to another coffee roaster.

Aside from knowing next to nothing about electricity, we knew precious little about mechanics in general. We both drove ancient vehicles, one of which we used for deliveries in the beginning.  It was not rare to break down (almost always the furthest point away from North Berwick).  One such time was in the middle of a huge winter storm. Another time the truck died in North Hampton, NH. We had a mechanic, Del Blickensderfer, who would come rescue us while allowing us to make our deliveries. It was those above-and-beyond acts of kindness that kept us afloat.

One day, I, Gussie, was driving home from work and got into an accident.  A car ran the stop light and totaled her car.  I called Jane all shaken and panicked.  Upon first asking if I was okay, Jane declared in her most optimistic voice that it was going to be a good thing.  The accident was NOT caused by my driving. The insurance money would allow for a better, more reliable delivery vehicle.  We bought the first of many vans. Well, a minivan really.  We weren’t exactly styling, but we cut down on our delivery route time by hours.

Today we are sporting a Ford Transit, red, and all tricked out with our logo and the cutest stick-figure girlies you have ever seen. 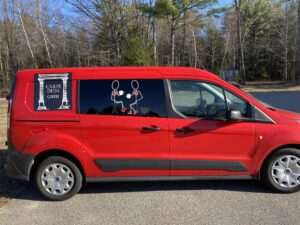