Over the years, we have often been the beneficiaries of “Good Samaritans”.  Before we had even opened for business, we experienced our first random act of kindness.  Because we didn’t know better, when our roaster was delivered it was left in a crate on the sidewalk in FRONT of our new digs.  (We have since learned to include in the delivery instructions exactly WHERE to leave the order.)  We were thrilled at the sight of the shiny new machine, but we were totally stumped on how to get it into the shop atop the cement pad that lay waiting.  As we stood scratching our heads about four men came up to us ask if they could help, and in perfect synchrony, removed the door to accommodate the width of the roaster, disassembled the crate, found hearty steel pipes on which to roll the machine into the building and gently laid it on the cement pad.  It was accomplished in less than ten minutes. We thanked them profusely and just as quickly as they showed up, they disappeared.

Another time, we had gone to the dump to drop off junk we were removing from our soon-to-be business when we came across an abandoned lifeguard chair.  That was a find we just couldn’t pass up.  We precariously loaded it onto the truck and brought it back to our roastery.  It seemed like such a good idea at the time.  Again, we unloaded it onto the curb in front of the building and then realized the issue we were up against. It was way wider than our front door.  We climbed up to ponder our situation when our landlord came up with his head shaking to ask what we planned to do with the chair.  Without hesitation he went and found a large wrench and proceeded to disengage two legs to shrink it enough to fit in the door.  We reassembled it and it stood proudly in that high-ceilinged space until we moved out seven years later.  Over the course of time, we “tootsed” it up with plush upholstery and precious gems (plastic).

We often would climb up there to make heady decisions about business, or to just enjoy a brewski after work. Our next place didn’t have ceilings tall enough to accommodate the chair so we had to bring it back to the dump from which we first rescued her.  How we wish we could have saved her until our final building which has ceilings plenty tall enough to house her.  We have made many decisions which would have been far more enjoyable made from on high. 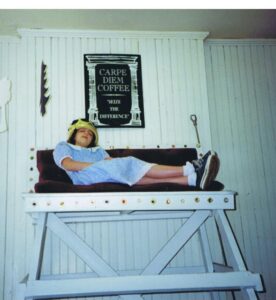 Not long ago we were struggling with the weigh and fill machine that stubbornly refused to hold a set point.  As fate would have it, we got a call from retired police chief Jones, who was in town and who wanted some coffee.  We had gotten friendly with him over the years and mentioned our problem.  He is a mechanically inclined guy who took a look at it and figured out what we needed to do. He fiddled with some wires.  Problem fixed! He had also looked at our old roaster and assessed a problem we were having with that and was able to secure the necessary part and fix that too!  We couldn’t be more grateful for that kind of help.

A number of years ago we had a pretty serious chimney fire.  Chimney fires are basically a part of the business but this one was more threatening than we liked. It involved calling the fire department.  They came in and within short order they had extinguished the fire but had left a fine coat of fire retardant on every surface of the business. We were fortunate that this happened on a Thursday, (although it was the Thursday prior to July 4th weekend).  Most of our orders were out for delivery and the remaining orders were removed from the building before the firemen arrived.  Generally, a fire would close a business for quite a while.  Although the physical damage was fairly small the retardant on all surfaces posed a serious problem, we needed a professional cleaning company.

You may be asking where the “Good Samaritans” come into play.  We got calls from all over the place offering their help.  A customer of ours was headed up to Bar Harbor and offered to deliver coffee for us.  Thank you, Elizabeth Williams. The state health Inspector dropped what she was doing to come tell us what we needed to do to get back open again. Time is critical.  She outlined exactly what we needed to do to start roasting again. Thank you, Rhonda Stone.

Our insurance agent dropped what he was doing to come assess the damage to expedite a claim for replacement costs.  Although he had ridden his moped to work, so he had to go home to get his truck. We had money almost before we could spend it. Thank you, Jim Cole.

Our coffee bean broker moved heaven and earth to get an expedited delivery of beans to us by that Saturday. Thank you, Carl Walker. And thank you truck driver who was waiting for us in the parking lot at seven am that Saturday. He was there before we arrived. It was incredible.

The cleaning company had us spic and span by mid-day Saturday. Thank you, ServPro. Miraculously we were roasting by the end of the day on Saturday.

We know that we have gotten endless help over our short and storied history.  We probably don’t even know some help we have received.  We live in a great little community, and we count our lucky stars for all the support we have gotten.