On October 1, 2006, we made our third, and final move, into our new roasting facility.  We had spent the previous year buying the land and watching the building be constructed. It was a thrill to go over to the other side of town and see the progress each day. Finally, we were going to have adequate space built with our specifications and allowing for growth.  We also added a 2,000 square foot addition to rent out to help offset the cost of the whole project. (More about that in a future post.)

Word got out about our move and as has been our experience time and again, we got help. A group of men from the American Legion arrived in various trucks to help with the move.  We’re pretty sure they didn’t realize how enormous their job would be.

For weeks prior to the move, we sorted through accumulated junk and made numerous trips to the dump.  BUT when we first took over the space from which we were moving we also happily adopted an entire “back area” filled with pieces of random furniture that the previous tenants had manufactured. We used a ton of it to outfit our space and still use it in our present spot.  It was constructed of black laminated pressed wood.  It was big and heavy.  We didn’t use all of what was left behind so now it was up to us to discard of the remaining pieces.  Again, we made many trips to the dump.

Prior to move-in weekend we had installed a larger roaster which stood ready to meet her little sister, the original L-12 roaster.  We sold the other L-12 roaster to a guy in California.  By this time, we felt we were old pros at moving those machines.

We had a system set up where Gussie would facilitate loading the trucks for movement to the new place and Jane would expedite emptying the stuff to their proper places in the new roastery. It was going along well until a marked darkening of the clouds and fierce wind picked up.  We both heard sirens from opposite sides of North Berwick while we took refuge in our buildings.  Neither of us knew the situation for the other and the vans and trucks in transit. After a harrowing twenty minutes of unfettered dark imaginings, we finally touched base and found out that a microburst swept across town tearing out trees in its path. It was a stunning display of nature’s unpredictable force.  No one from our crew was hurt, no vehicles affected, but we had to reroute for subsequent trips.  We were able to complete the move in one long day.  Again, we are grateful to our friends and the American Legion for their tireless work.  We set up everything on Sunday and on Monday we were back at it. We jumped the gun by a day by not having obtained our occupancy permit, but with the understanding of the code enforcement officer and the bravery of our contractor, Cliff Foster, we were granted that piece of paper.  No harm, no foul. 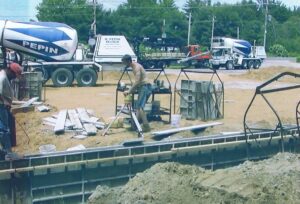 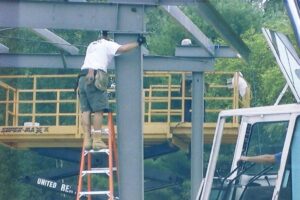 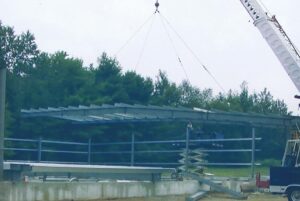 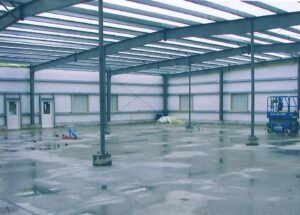 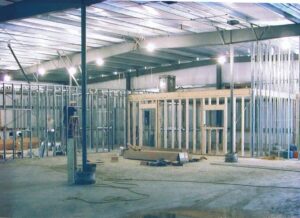